By Dr Deepu
Silhouette sign/loss of silhouette sign/ loss of outline sign.
I was always confused with the silhouette sign for its hidden meaning and failure to decode it by many medical students. So, I thought it would be apt to unravel it so that it could be handy for many medical students.
One of the most useful signs in chest radiology is the silhouette sign. This sign was described by Dr. Ben Felson. The silhouette sign is in nothing but  elimination of the silhouette or loss of lung/soft tissue interface caused by a mass or fluid in the normally air filled lung. For instance, if an intrathoracic opacity is in anatomic contact with, for example, the heart border, then the opacity will obscure that border. The sign is commonly applied to the heart, aorta, chest wall, and diaphragm. The location of this abnormality can help to determine the location anatomically.

Just go through the X Ray to know the  various structures seen in the chest x ray. 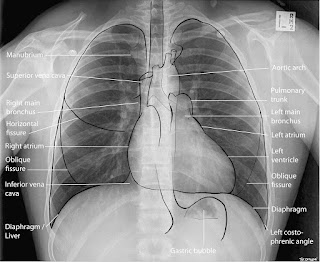 Let me explain this with this image.
What do we see???
There is plastic bottle which is surrounded by air, the margins of the shadow is very  well demarcated from the surrounding air.

First scenario: There are two bottles, made of same material, placed apart from each other. The shadows appears separate from each other. Let us consider the right bottle to be the heart and the air surrounding the bottle as lung. The left bottle as a mass, since they are far from each other, the border of both  is visible clearly. 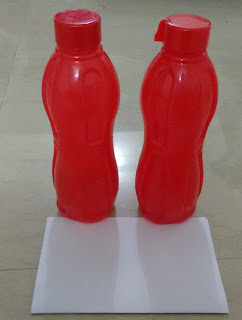 Second scenario: Here we see the bottles are touching each other at two points and there is no gap in between and if we look at the shadow, we cannot differentiate between the two shadows, they appear like a single opacity at the upper and lower ends. 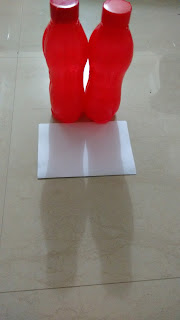 For the heart, the silhouette sign can be caused by an opacity in the RML, lingula, anterior segment of the upper lobe, lower aspect of the oblique fissure, anterior mediastinum, and anterior portion of the pleural cavity.
This contrasts with an opacity in the posterior pleural cavity, posterior mediastinum, of lower lobes which cause an overlap and not an obliteration of the heart border. Therefore both the presence and absence of this sign is useful in the localization of pathology.